On May 7th, Henery Press and the Frisco Library honored two of our own, Katie Bernet and Derek Blount.

Katie is the 2016 winner of the Frisco Library First Chapter contest for the first chapter of her novel, Nomad, a YA contemporary about Isla, an unwilling nomad who has to confront her crazy-close relationship with her mom to understand where she belongs. 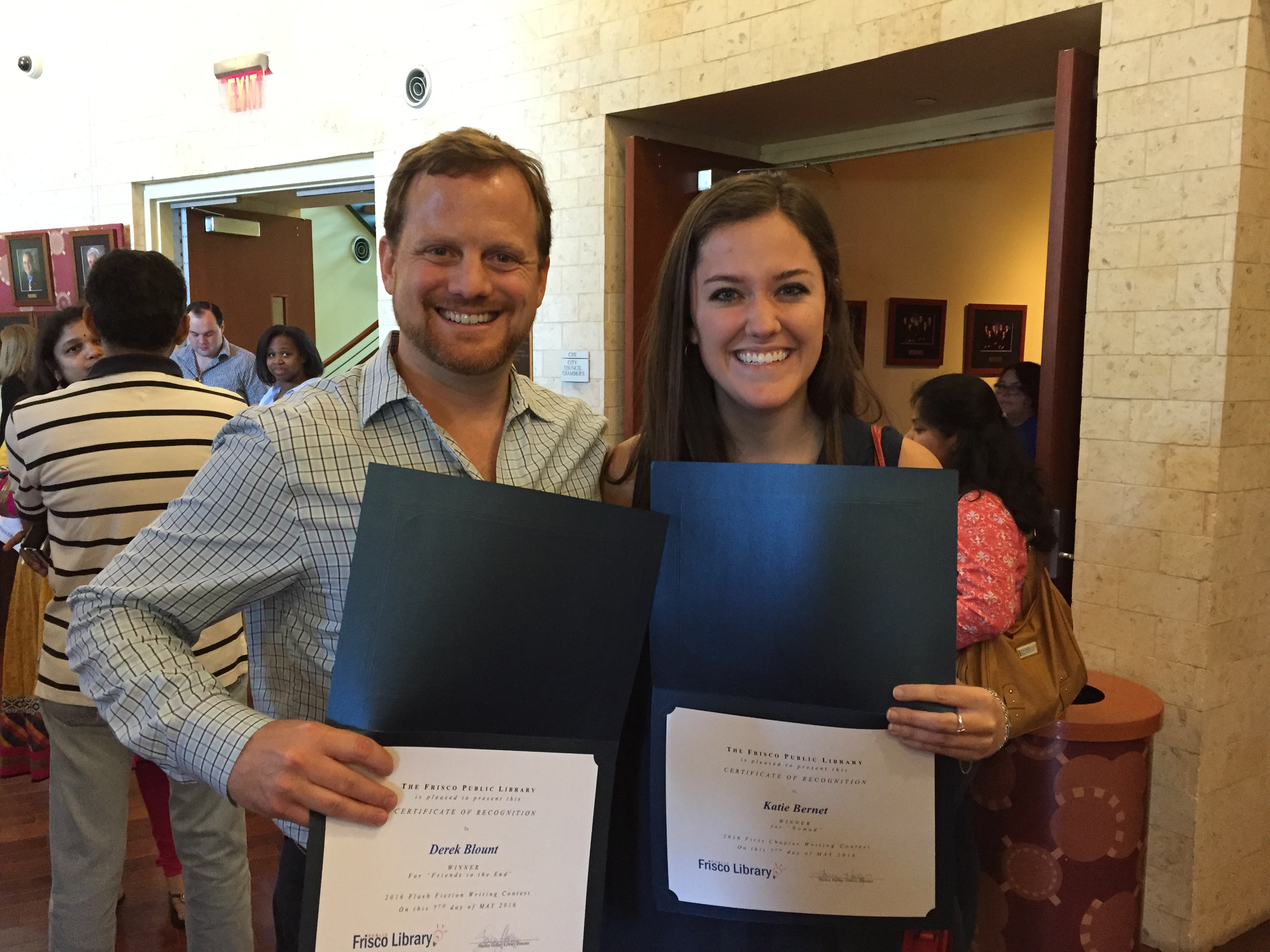 Katie joins past winners DFWWW president, Brooke Fossey (2015) plus Melissa Lenhardt (2014) and George Goldthwaite (2014), helping the workshop secure victory for its third year in a row.

In addition, Derek landed the workshop's first the Flash Fiction win for his work, Friends to the End, a story where darkness surrounds Harry and George. Frightened. Trapped. And the creature waiting below. With hope running out, can their friendship somehow save them?

Want a glimpse into how they did it? Here are the openings to both stories:

I was born to a rain soaked woman in the streets of Versailles. She knew only one word of French and used it copiously on the night of my debut. “Merde,” she spat through gritted teeth. “How did this happen to me?”

A featherweight man ducked between her knees with shaking hands and sopping hair. “Ellery,” he said in a clotted accent, “you are a mother.”

I never knew the man because that night, as an ambulance siren swelled through the streets, he stood up like a single grain of sand in the shadow of a typhoon and ran.

But the woman stayed. She held me in her arms and, when I opened my eyes for the first time, she promised we would never be apart.

Friends to the End

Darkness surrounded Harry and George, and the creature waited below. They were safe for the moment. The thing could not get them up here, but they could not stay. It simply wasn’t an option.

Each year, area authors submit their first ten pages of their novel or 500 words of their flash fiction to the Henery Press First Chapter Contest, sponsored by the Frisco Public Library. Henery Press, an award-winning local publishing company, reviews the entries and selects the winner.

Katie Bernet has been a workshop member since 2014.

Derek Blount initially became a workshop member in 1999 and rejoined us in 2016.

If you want to learn how DFWWW authors keep on bringing home the wins, join us any Wednesday night at 7:00 pm at The Simmons Center in Euless.