Tony Skur, a longtime member of the DFW Writer’s Workshop and author of Christmas Help, More to Come, and One More Time, passed away on September 21. He was a true gentleman and patriot who will be sorely missed.

Tony was born in Ohio in 1931 and joined the US Marine Corps Reserve at the young age of seventeen. Three years later, he enlisted in the US Air Force and was accepted into the aviation cadet program in 1952. His first assignment was flying the F-86D Sabre Dog, an early all-weather swept wing jet interceptor. 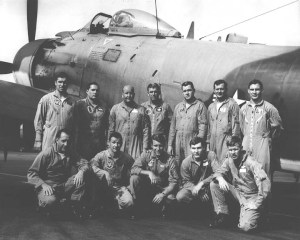 Volunteering to serve in Vietnam, Tony flew in the Special Operations Wing, piloting one of the most bad-assed piston-powered aircraft ever built. The A-1 Skyraider, originally designed for the Navy in World War II, was the first airplane capable of carrying more than its own weight in ordnance. And carry ordnance he did. Where most planes of the era streaked across the sky at high altitudes, Skyraider pilots flew in the weeds, eyeball to eyeball with the enemy, providing close air support for our ground forces and performing rescue operations for downed airmen. He retired from the Air Force in 1978 with the rank of full colonel.

Tony wrote about flying and he wrote about war, but he also wrote about love, for it was love that filled his heart. While based at Perrin Air Force Base in Wichita Falls, he met the beautiful Kathleen Mayberry and proposed nine days later. Together they raised three sons and a daughter, living in wedded bliss for 59 years. During Kathleen’s later years, Tony lovingly cared for her as Alzheimer’s slowly took her. She passed away in September 2013.

A life of service is a life well lived. Not only did Tony serve his nation in war, he spent much of his time in service to others. While stationed in Tokyo, he helped keep an orphanage supplied with food, clothing, and school supplies. In Alaska, he was asked to prepare 30 children for their first communion, earning him the nickname ‘Pope Tony.’ Until his last days, he volunteered with Meals On Wheels, delivering food to senior citizens in his Keller community.

A month ago, Tony was diagnosed with advanced pancreatic cancer. Even though he had a rough start with chemo therapy, he fought hard and kept his spirits high. Unfortunately, he passed away in his sleep Sunday evening, September 21, 2014.

Always a gentleman and a true gentle man, he will be sorely missed by his family and friends, but we can take solace in knowing he is forever reunited with his beloved Kathleen. Colonel Anthony Skur, my dear friend Tony, rest in peace.