Good in Any Language 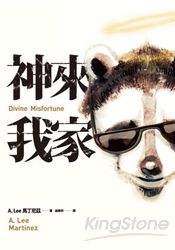 A. Lee Martinez has a lot to celebrate overseas.

His book,  Divine Misfortune , has recently hit #2 on the Kingstone Book Bestseller List.

Kingstone is one of the largest chain bookstores in Taiwan, and though we cannot make the trip to confirm it, it's safe to assume Divine Misfortune is resting comfortably on an end cap or its own table display.

Congrats to him, or rather, 祝贺您.

Posted on Press Center by Stephen Manning · December 23, 2010 1:12 AM
Despite the approach of Christmas, and the return of cooler weather to North Texas after a brief warm spell, a good-sized crowd attended the December 22 meeting of the Workshop.

In the news, A. Lee Martinez received payment for the movie option of his recent novel Divine Misfortune. Rosemary Clement-Moore displayed the paperback edition of her Young Adult book, The Splendor Falls, with its stylish new cover. Her copies arrived during a special time (happy birthday, Rosemary), and the book is scheduled to be in bookstores on January 11.

In other news, Jeri Burbage reminded everyone the election for the 2011 Board of Directors will be held on Wednesday, January 5. To be eligible to vote, members must have paid their 2010-2011 fiscal year dues and have attended at least three of the five business meetings prior to the election. Carolyn Williamson again advised that overdue library books need to be returned before year's end. Larry Enmon issued a second call for volunteers to assist the agents and editors during the 2011 DFW Writers' Conference.

Posted on Press Center by Stephen Manning · March 03, 2010 5:29 PM
It was a night for numbers during the March 3 business meeting of the DFW Writers' Workshop. The 2010 Workshop and Conference budget were discussed with both showing in the black. Five new books were donated to the Trophy Room, bringing the number of traditionally published books written by DFWWW members to 296. Three new members joined the group.

In other news, Ginnie Bivona has an essay in the recently released work Hear Us Roar. A. Lee Martinez displayed a copy of his upcoming book Divine Misfortune. Virginia Traweek's alma mater selected her to produce a promotional magazine titled Peer Perspectives.

Finally, volunteer sign-up for the DFW Writers' Conference begins next week. Pat Hauldren and Carolyn Williamson are looking for volunteers for the registration table and class monitors respectively.